BEGINNER
THIS IS A BEGINNER ARTICLE

As mentioned in the Introduction to Mapping guide, a token is the MapTool jargon for a visual marker that is placed on a map within the MapTool software. The most intuitive use for tokens is to represent characters in the game - in other words, tokens take the place of miniatures on the virtual tabletop.

This guide assumes that you have read the Introduction to Mapping, and that you know how to:

If you don't know how to do these things, please read the Introduction to Mapping guide - otherwise, the stuff below might not make much sense!

Finally, this guide will be written predominantly from the point of view of the GM -- someone who has complete control over all token settings and campaign properties. Players (that is, individuals who join a game in the role of "Player") are restricted from changing many things in a particular campaign.

Although most MapTool users use the term "token" to refer only to images representing characters and creatures on a map, in reality, the word "token" refers to any image item that is dropped onto a map in MapTool. The way a particular token is handled is dependent on the Map Layer onto which it is placed. These layers are explained below, because they are important in understanding how to work with tokens.

You'll note that I didn't discuss the Hidden layer in the above paragraph. That's because the Hidden Layer has a slightly different purpose.

While the Token, Object, and Background layers have a fairly intuitive relationship in terms of how one might think of the world -- I'm a person or creature, that item over there is an object, and surrounding us is the background -- the Hidden Layer is the things you cannot see. In MapTool, anything placed on the Hidden Layer is visible only to the GM until he or she decides to move it to one of the other layers.

Generally, you'll want to put characters and objects on this layer - there aren't many reasons to put a background stamp on the hidden layer, although I'm sure you can think of a couple.

Suffice it to say, when you place a token on a MapTool map, it pays to be aware of which layer you placed it on!

Creating a token is as simple as dragging an image from the Resource Library onto the Token Layer of a map. But how do you create an image in the first place? There are several options.

MapTool's user community has created a wealth of token images that are available for use. Visit the RPTools Gallery to see the hundreds of token images already out there.

1. Download TokenTool and open it by double-clicking on the file with the extension .jar (this is a Java "JAR file" which will run a java program).

2. Find an image you like (be cautious about copyright!) and drag it onto the left pane of the TokenTool window (this is the part with the small green ring and a black background).

3. When the image appears, drag it around with the mouse until the portion you want for your token is inside the green ring. You'll see a preview of what the token will look like in the upper right side of the TokenTool window.

4. When you get it where you like it, go to File > Save Token, and save the newly created token in a directory that is either already in your Resource Library, or is one you plan to add to your resource library. Note that the file will be saved in PNG format (this is a good thing! it allows for transparency so your token isn't slopping outside the border!).

5. Go back to MapTool and add or refresh your Resource Library, and there you'll see your new token! Drag it onto a map, and you're good to go.

You can of course combine drawing your own image with using TokenTool to create handsome and neatly formed tokens.

Editing a token means changing any of the token's characteristics, be that its image, its name(s), or its configured settings. Changing token names, image, and size are covered in Introduction to Mapping.

The following sections deal with the various options, tabs, and drop-down boxes in the Edit Token Dialog.

Tokens have 2 possible types in MapTool: NPC and PC. These will be familiar to players of roleplaying games because they stand for "Player Character" and "Non-Player Character," and the most common use of this "type" setting is to distinguish between the two groups during actual play.

NOTE: The type of a token does not have any bearing on who may manipulate that token or view it's properties - instead, that power is granted to the owner or owners of a token. As GM, you are considered to have ownership of all tokens on all maps in the campaign. See Ownership, below, for more details.

To change the token type:

1. Double-click the token to open the Edit Token dialog.

2. In the upper-right corner, use the drop-down box to select PC or NPC. 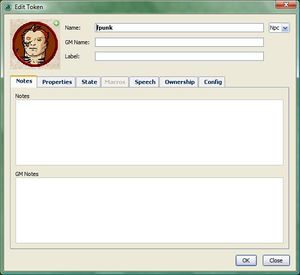 The Notes Tab of the Edit Token dialog

The Notes tab presents two areas where you can enter notes about the token. These fields support basic HTML tags, so you can format the note.

The upper text field is there for notes that are available and visible to anyone who wishes to see. The lower field (titled GM Notes) is for notes that only the GM(s) should see.

Notes are a little tricky - MapTool has a way to display them in a nifty popup, but you have to do a couple things first.

Now, you'll notice that when you put your mouse cursor over the token, the cursor will change to a hand. If you double-click, instead of the normal Edit Token dialog, you'll see a small popup in the lower-left corner of the map, which will display the notes.

The major lesson is that -- while Token notes can be accessed in many ways -- one of the more common uses is to place notes and reminders on tokens and objects that will be on either the Object or Background layer. 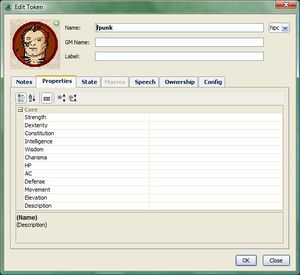 Properties are a topic that deserve their own guide, as they are heavily involved in the creation and use of token macros. This guide won't go into excruciating detail about properties, but will instead deal with only the most basic information about them.

Every token dropped onto a map in MapTool automatically gains a set of properties, which can basically be thought of as stats, characteristics, or traits (you know, the numbers on a character sheet). In effect, each token is carrying around it's own built-in character sheet. In programming terms, properties can thought of as variables that can be set to different values, and then used later by macros.

When you click on the Macros tab in the Edit Token dialog, you'll see a list of the properties that are currently set up for the Campaign you're using. If you've opened up a new campaign (or just started MapTool), you will see the default property set, which looks like:

For the rest of this guide, examples using properties will use the list above.

Once you do that, and hit OK, that property on that token will be assigned the value you enter. Later on, if you write macros, you can refer to those properties to make calculations or roll dice.

Since properties are such a major topic on their own, check out the Introduction to Properties guide for detailed information. 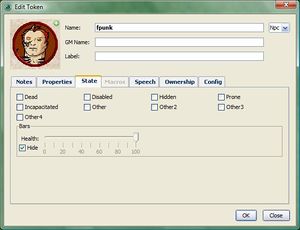 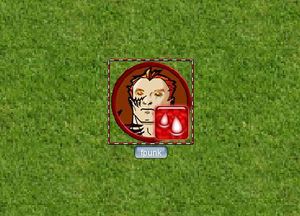 States are visual markers that can be applied to a token (typically appearing as an image superimposed on the token) that can be used for any sort of reminder that you might need in a game. For instance, if you want a marker that a particular NPC token is "dead", you can set the state "Dead" on the token, and whatever image you've selected to indicate "Dead" will appear on the token.

The default states that load when MapTool starts are: 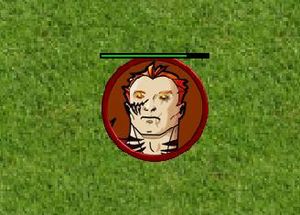 This token has a bar applied, superimposed on the token. The bar can be set to reflect different quantities via macros

The State tab also contains the setting information for the bars that the token displays or can display. These bars are shown superimposed over the token (at the top, bottom, or sides), and can be used to track things like health (or ammunition, magic, or anything that can be lost or expended).

As of MapTool version 1.3.b54, the Macros tab is no longer enabled. This tab originally held the token macros, but as macro capabilities became more advanced, this tab became less and less useful, until finally, it was removed. It is present in earlier versions, though, if you want to take a look. 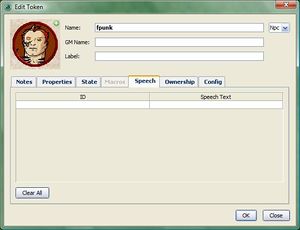 This tab contains the token's speech list. You can use this tab to configure sayings, aphorisms, battlecries, and anything you might want your token to "say" in chat. There are two fields for each speech item:

To use a speech item, do the following: 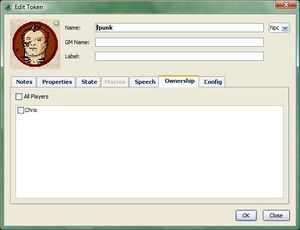 Token ownership determines who among the players connected to the game is allowed to select, move, or view the details of a given token.

If you are the owner of a token, you may select it, double-click on it to open and edit it, and move it around on the map. If you are not an owner of a particular token, you are limited to looking at it on the map -- you will not be able to select, move, or view its properties and configuration.

To set an owner, simply check the box next to that individual's name. The names shown in the box will be the names of each player (including the GM) connected to the game (so if you're looking at the Ownership tab when nobody else is connected, you'll see only your own name). If you want to give ownership to all players, just check All Players.

(Note that the selection of options when the server is started must include Strict token ownership if you want the functionality described above. See Introduction to Game Hosting#Starting Up a MapTool Server for details on server options.) 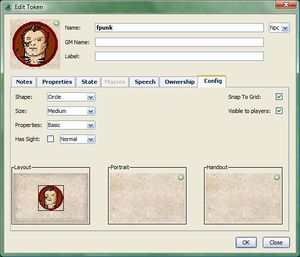 This tab contains a number of settings that affect how the token looks, moves, and interacts with MapTool.

Tokens can have three shapes in MapTool:

A token can be given a number of sizes, which scale the token image larger or smaller.

The available size depend on the map grid used when setting up a map. If you set a map with a grid (hexagonal or square), you will have the Free Size option (which lets you scale the token as you need), or a number of sizes from "Fine" to "Colossal" (if you play D&D, you'll probably recognize them).

If you do not set a grid when you create the map, you will be able to scale the token along a number scale, from -11 to +20.

This field allows you to indicate what kind of sight the token possesses. Sight settings allow the gamemaster to simulate darkness, light, hidden objects, and hiding enemies.

This checkbox lets you designate a particular token as invisible to players - when checked, no player connected to the game will be able to see the token or interact with it in any way.

There are three fields dealing with the token's visual appearance: