Fog of War is a feature of MapTool which obscures parts of the map from players during play. It can be enabled for the currently selected map in the Map Menu by clicking on 'Fog of War'. When enabled, the option will appear ✓checked in the menu. Fog of War is remembered even if the setting is toggled off, but can be reset using the 'Restore Fog of War' menu option.

Once enabled, tokens with defined Sight Settings can expose an area of hard fog of war. What is exposed when is determined by the token's sight distance, and vision setting. The Vision Blocking Layer (VBL) totally blocks token vision, and 'hard' fog of war overlapping with VBL cannot be exposed by the players.

Each map has independent Fog of War settings. The default fog of war settings for new maps can be set in the MapTool Preferences window.

The following areas of MapTool contain settings effecting Fog of War. For more about each setting, please visit their related documentation pages.

Note: If Vision is Off on a map, this setting will always display the token over hard fog of war regardless of VBL, Token Sight, or Map Vision Distance. This can cause issues on maps with many 'Visible over FoW' doors, as all the doors will all appear over the hard fog which can spoil the map for players.

Exposing and Restoring Fog of War

Apart from resetting the fog from the Map menu and auto-revealing fog on player movement, MapTool has several other ways to affect fog of war directly and indirectly.

Tokens with sight
As long as a token has 'Has Sight' checked in its properties and a valid sight type selected, a GM or token owner can right click on the token to access its context menu and select 'Expose Visible Area'. This will expose hard fog of war up to the token's sight range (with line of sight blocked by VBL). If vision is set to 'Night', then only illuminated areas within this area will be exposed. Without tokens with valid, sight settings
Toolbar tools
The GM can use the Fog of War tools to expose the fog in specific areas. Shift-clicking with a Fog of War drawing tool will restore fog rather than removing it. If Individual Fog of War is enabled on the server, selecting a token will affect the fog only for that token.
Macro functions
Some functions, such as, can affect fog of war. 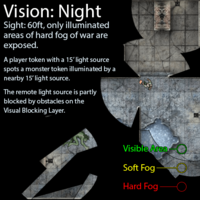 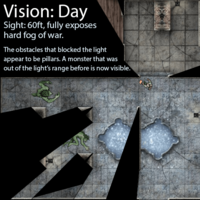 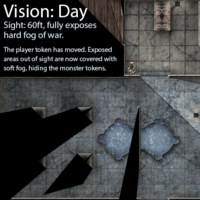 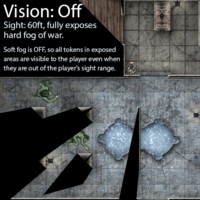 The above images demonstrate the same map with different vision settings.

Example 1 - Map Vision -> Night
In Night mode, tokens can only see illuminated areas within their sight range. In this example, the player token has a 15' light source attached to it, and can see two other 15' light sources nearby. The Visual Blocking Layer blocks both line of sight and illumination, so some areas are partially obscured. Note the legend showing the types of Fog of War and the visible area.
Example 2 - Map Vision -> Day (1)
In Day mode, tokens can see up to their sight settings, regardless of illumination. Note that now, the player can see a monster token that is more than 15' away that was previously under hard fog of war.
Example 3 - Map Vision -> Day (2)
In the third image, the possibly frightened Player token has moved behind a wall. Note that the soft fog that now obscures the monster tokens.
Example 4 - Map Vision -> Off
With Vision OFF, see that tokens in all exposed areas are visible, even past VBL. Though hard fog of war will still be exposed only up to a token's sight range, tokens will remain visible in all exposed areas of the map - even beyond a token's sight range.