MapTool has a built in AI pathfinding feature. When activated by a GM via the ‘AI’ toggle button on the toolbar, tokens will find the shortest path to its destination as you drag them on the token or hidden layers. The movement takes into account the Movement Blocking Layer (MBL) and terrain modifiers configured on intervening tokens. This means your tokens will not move through walls, and will find an efficient path past obstacles and around or through difficult terrain. AI Pathfinding correctly accounts for a game's diagonal movement settings as well. Optionally, movement can also be restricted by the Vision Blocking Layer (VBL).

The AI setting can be toggled by clicking the 'AI' button on the toolbar so that it shows green text. When the text is gray, AI is disabled.

AI toggle buttons are grouped next to the the other Interaction tools. AI Pathfinding can be set to block movement on MBL, VBL, or both. When hosting a game on MapTool 1.6 and above, only GMs may change this setting and the setting is the same for all connected players. On prior versions with AI, the toggle is available to players on a per-client basis.

Tokens with terrain modifiers are always considered in movement calculations when AI Pathfinding is enabled.

To add movement blocking to your maps, use the Blocking Layer drawing tools on the toolbar. Once selected, you must choose which blocking layer you are affecting with your drawing: Movement, Vision, or Both. MBL and VBL are only visible when this drawing mode is engaged, and render with very bright colors over all other graphics in the Map View to be as clear as possible. Note that Undo/Redo does not work with Vision/Movement blocking tools.

Here are some ideas for using these different modes in your maps:

Token VBL is another way to place VBL in your maps which allows the object to be itself visible over fog. This can make bushes, fog, and other vision blocking effects which need to be visible to players. Combined with Terrain Modifiers such tokens can also block movement, allowing mobile objects such as statues or boulders which the player can see but not move through. 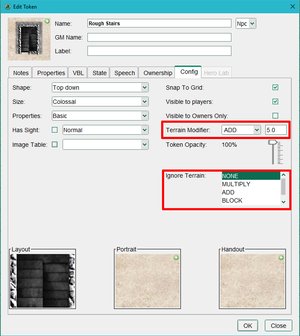 Using the BLOCK Terrain Modifier Type, or setting Token Modifier value for the ADD and MULTIPLY types to a sufficiently high number, will effectively block movement and make tokens go around the obstacle. This is useful for things like an arrow slit, window, lava, etc. Any token can have this modifier which means you can set NPC tokens so PCs must go around them or stamp tokens on the object layer like oil or water. You can also place tokens on the hidden layer to denote difficult terrain.

To set the terrain modifier of a token, open the Token Editor by double clicking the token or accessing it via the right-click menu. Navigate to the Config tab and set the Terrain Modifier value and type. You can also set the token opacity from here, which may be useful for creating translucent terrain markers.

Once created, tokens with Terrain Modifiers can be placed on any layer (including the hidden layer) and still affect the movement of other tokens.

Left: Setting up a map with vision blocking and terrain modifiers for use with AI pathfinding. Right: A token being moved across the sample map with AI enabled.

The sample map pictured was created by creating a large block of VBL (the blue area) and removing squares of it by holding down the shift key while placing rectangles of VBL. There is also VBL on the stamped steps as well to make the PCs navigate them as they should.

The Map Units are set to '1' on this map to make it easy to see the multiplier at work. The staircase stamp has a terrain value of 2 as do the other steps in the horizontal corridor (note the image under 'Using Terrain Modifiers'). If the map units were set to '5', a terrain modifier of 2 would make the steps cost 10 units to enter.

With the movement AI enabled, the PC can be dragged anywhere but should go around VBL and suffer appropriate movement penalties when passing over tokens with a Movement Modifier.

But I want to jump in the lava pit!

If you absolutely, positively, despite all warnings to the contrary want to enter difficult terrain, you can use the spacebar to set a waypoint to force the path. You can also use this to get into a more advantageous attack position even over difficult terrain.

There are a few limitations to the movement AI: