A large collection of macros and resources for MapTool compiled by Wolph42.

You can download the Bag of Tricks from the RPTools forums.

Note that the BoT contains far more material, macros, functions and tools then the below two functions. The BoT also contains a detailed manual with description of all available functions, including these two below. This article was written because from a 'macro function' perspective they are the two most relevant macros that the BoT contains.

Using the automatic remote execution function from Bag of Tricks

Usually in a macro you would like the execution of a macro on the computer of those users who own the token in context. Or maybe you want to execute a macro on ALL clients but you have to figure out who the current 'executer' is and run the macro for that client separately as the execLink() is only executed on remote clients. To make this a bit easier, I've created a couple of functions which are part of the Bag of Tricks (BoT). If you have the BoT installed, then the following functions are available to you:

This macro executes the macro macroName on ALL SELECTED clients. So in contrast of broadcast(execLink()), you do not have to worry about who is executing the macro since everyone does.

The bot_all() function is another BoT function that returns the names of all players that are logged in. See below for more info.

If you want to use a different message format, one is availalbe through this functions.

Broadcasts a preformatted message to all users (default). The message consists out of a black (bg) and white (txt) header (default) and a delimited textbox below it, containing the message. When the message is left empty () only the header will be displayed. bot_message contains the following optional parameters (only message is required):

A couple examples of use: 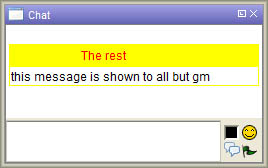 The following functions can be used in conjunction with bot_message() and return a JSON ARRAY (e.g. ["Frank","Jim","Suzy"])

The 'bot_' prefixes in all these function are added as a precaution to make sure that there are no conflicts with a framework in which you use the BoT. If you however want to use these 'retrieve user' functions but without the 'bot_' prefix you need to create your own set of user defined functions.