From RPTools Wiki
(Redirected from Token:state)
Jump to navigationJump to search

A token state is a binary (i.e., it has two possible values, on or off) condition that is set for a given token. States are frequently used for conditions or statuses that affect a particular character in a game (for example "Bloodied" or "Fatigued" or "Fighting Defensively") and frequently have images associated with them that are displayed to players and the GM. However, they can be used for any application in which a condition having only two possible values would be useful.

The image below shows a token state with an associated image applied to the token. In this case, the state name was configured by the individual creating the campaign to be called "Bloodied" and to have the associated image overlay (the state image is courtesy of the RPTools forum member AidyBaby). 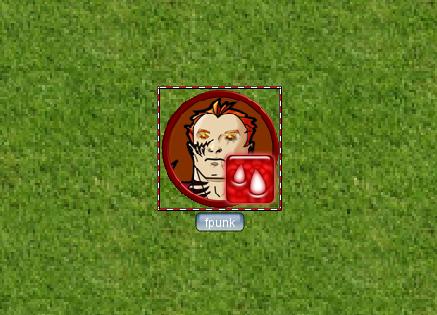 Getting Token States with Macros

States are special variables that can be referenced by macros using the general format state.statename where statename is the name configured by the user for a given state.

States can be retrieved using macros.

States can also be set using macros, by assigning a value of 1 or 0 to the token state.

Suppose we want to check to see if a token is "dead" and if so, set the "Dead" state on that token. We are assuming two things:

To check for "death" and, if required, set the appropriate state, we write the following simple macro:

Use the setState() function instead if your state name has a space in it.